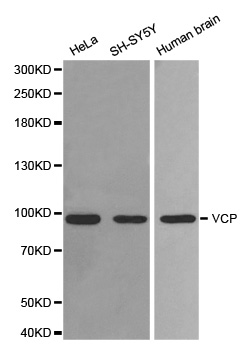 Valosin-containing protein (VCP) is a highly conserved and abundant 97 kDa protein that belongs to the AAA (ATPase associated with a variety of cellular activities) family of proteins. VCP assembles as a homo-hexamer, forming a ring with a channel at its center (1,2,3). VCP homo-hexamers associate with a variety of protein cofactors to form many distinct protein complexes, which act as chaperones to unfold proteins and transport them to specific cellular compartments or to the proteosome (4). These protein complexes participate in many cellular functions, including vesicle transport and fusion, fragmentation and reassembly of the golgi stacks during mitosis, nuclear envelope formation and spindle disassembly following mitosis, cell cycle regulation, DNA damage repair, apoptosis, B- and T-cell activation, NF-κB-mediated transcriptional regulation, endoplasmic reticulum (ER)-associated degradation and protein degradation (4). VCP appears to localize mainly to the endoplasmic reticulum; however, tyrosine phosphorylation is associated with relocalization to the centrosome during mitosis (5). In addition, following cellular exposure to ionizing radition, VCP is phosphorylated at Ser784 in an ATM-dependent manner and accumulates in the nucleus at sites of double-stranded DNA breaks (DSBs) (6). Exposure to other types of DNA damaging agents such as UV light, bleomycin or doxorubicin results in phosphorylation of VCP by ATR and DNA-PK in an ATM-independent manner (6).