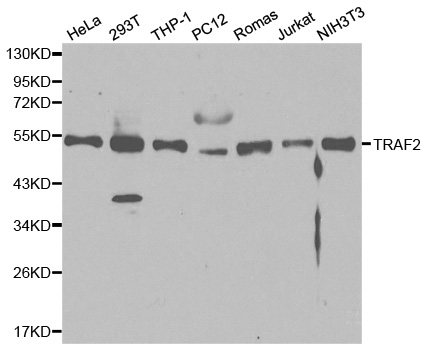 TRAFs (TNF receptor-associated factors) are a family of multifunctional adaptor proteins that bind to surface receptors and recruit additional proteins to form multiprotein signaling complexes capable of promoting cellular responses (1-3). Members of the TRAF family share a common carboxy-terminal "TRAF domain" which mediates interactions with associated proteins; many also contain amino-terminal Zinc/RING finger motifs. The first TRAFs identified, TRAF1 and TRAF2, were found by virtue of their interactions with the cytoplasmic domain of TNF-receptor 2 (TNFRII) (4). The six known TRAFs (TRAF1-6) act as adaptor proteins for a wide range of cell surface receptors and participate in the regulation of cell survival, proliferation, differentiation, and stress responses.While TRAF2 was originally described through its interaction with TNFRII, it has since been shown to interact with other surface receptors including CD27, CD30, CD40, 4-1BB, Ox40, HVEM/ATAR and LMP-1 (1-3). TRAF2 also associates with a large number of intracellular proteins, including TRADD, FADD, I-TRAF/TANK, TRIP, A20, c-IAP1 and 2, Casper, RIP and NIK, which help to regulate cell survival. Dominant negative and knockout studies have shown that TRAF2 plays an important role in TNF-mediated activation of NF-kB and the MAPK/JNK kinase pathway (5-7).